Spent my Memorial Day evening at a neighborhood party, which included an impromptu house concert  with Pennsylvania-based musician Jim Smith.  It was a real treat.

Jim, 63, grew up on his grandfather’s farm in Horseheads, NY, and started playing music as a kid. At first it was mostly at church, but it soon became his life. He’s been playing professionally ever since. 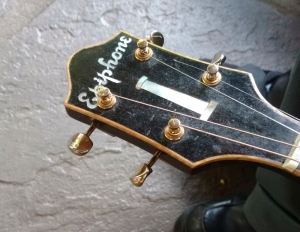 He plays tunes from the 1920s and ’30s on his 1938 Epiphone tenor guitar. The Epiphone is a four-string model, tuned like a cello. It’s an easy instrument for banjo players to pick up. (Jim also plays banjo.)

He moved to Philly in the 1980s and has been there ever since, playing solo, sitting in with other groups or with his own groups, The Trailer Park Trio and Hot House.

So glad to have a chance to hear him. Hope we can get him back to Davidson or Lake Norman soon for a gig.

Here’s a sample of what we heard – Jim’s rendition of “Them There Eyes,” which Billie Holiday recorded in the 1930s.